How to Install Parrot OS [Step by Step Guide]

In this blog, we'll walk you through a step-by-step installation guide of Parrot OS in Virtual Box using an OVA file, and the basic configurations, and an overview of parrot OS, It is a Debian-based distro and is available in Security Edition and Home Edition with Mate and KDE desktop environment. Security Edition has been most popular among Security researchers and developers.

Parrot is a Debian Based free and Open Source Linux distribution that is widely used by security researchers, security professionals, developers, and privacy-conscious individuals. It comes with a fully portable cyber security and digital forensics arsenal. It also comes with everything you'll need to write your own apps or secure your online privacy. Parrot is available in Home and Security Editions with the KDE and Mate desktop environments, and as well as a virtual machine and a Docker image.

The following are some of the features of Parrot OS that set it apart from other Debian distributions:

An ISO image is an ISO file that accurately represents a whole CD, DVD, or Blu-ray disk. A single ISO file can accurately copy the full contents of a disk. One of the advantages of using an OVA file is it does not require us to create a separate bootable flash drive or drive partition and all configurations are already done for us.

OVA files, commonly known as Open Virtual Application files or Open Virtualization Format Archive files. Virtualization programs use them to store various files related to a VM. Disk images (such as VMDKs), an OVF descriptor XML file, ISOs or other resource files, certificate files, and an MF manifest file are among the files you might find there. One of the advantages of using an OVA file over ISO is that it does not require us to create a separate bootable flash drive or drive partition and all configurations are already done for us.

Step 1: Go to the official parrot download page, you will be presented with two options OVA Home and OVA Security. 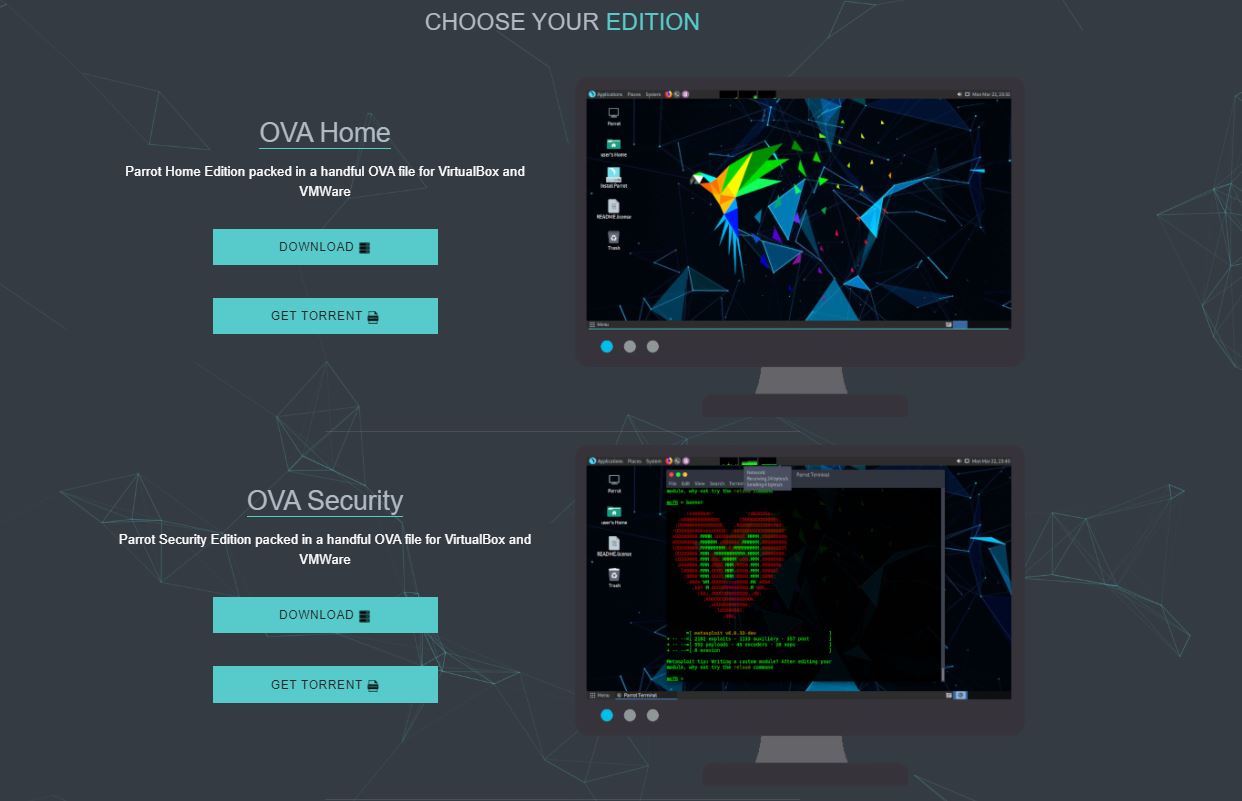 Step 2: Choose the Edition as per your requirement and click on download, the Home Edition has the basic toolset ready for daily requirements and the Security Edition consists of a larger toolset for pen-testing and forensics. 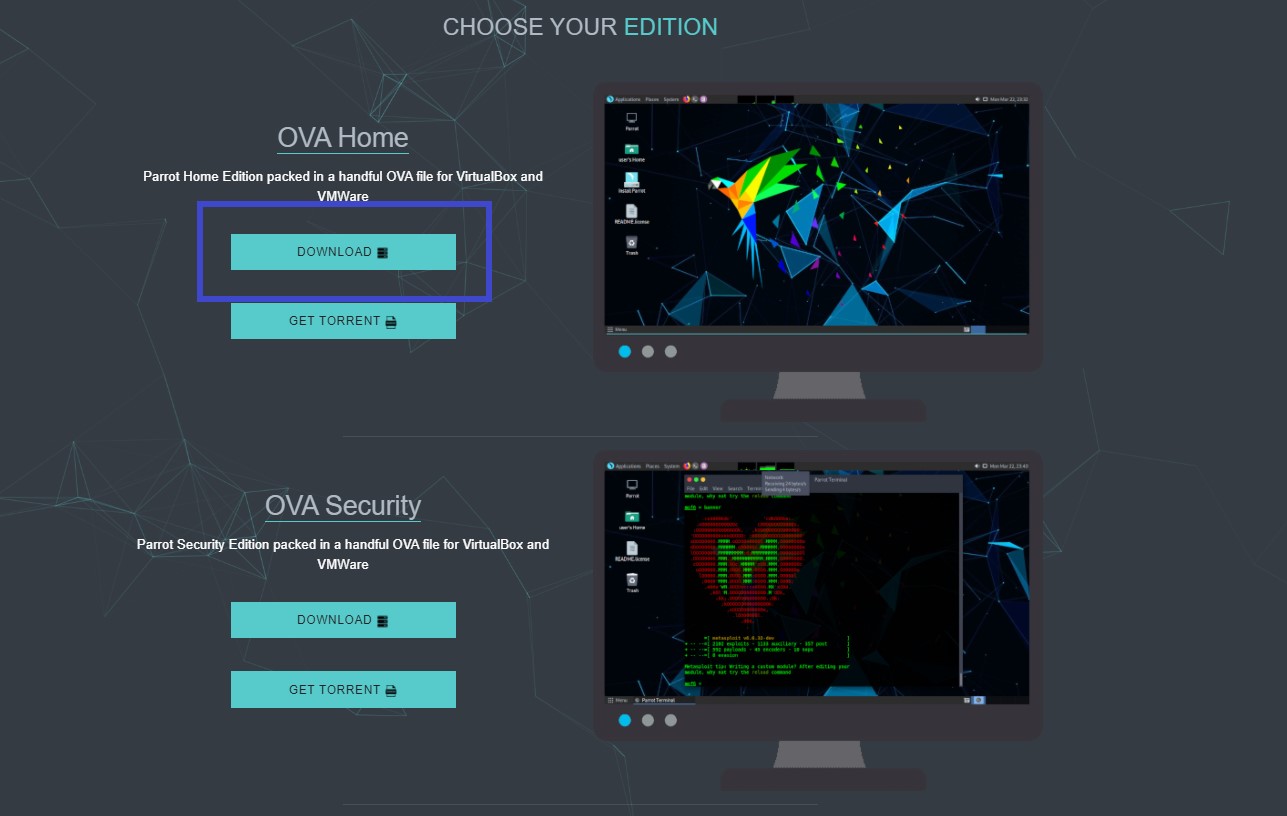 Step 5: After extraction, you will have 3 new files. 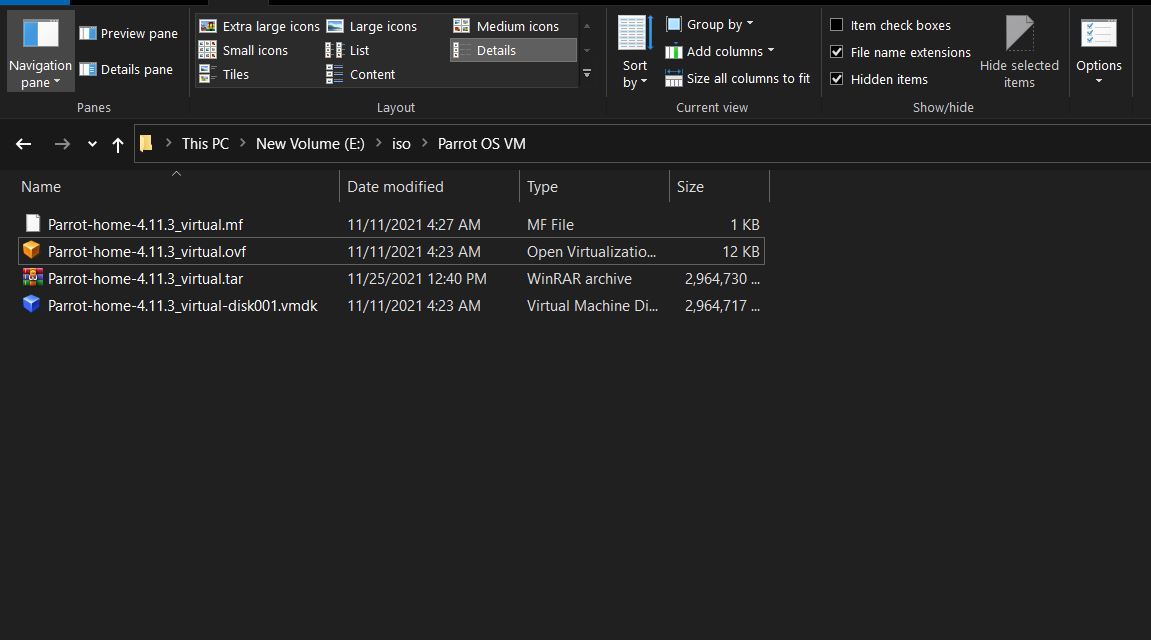 How to Install Parrot OS

Step 1: Start the Virtual box application and click on Import. 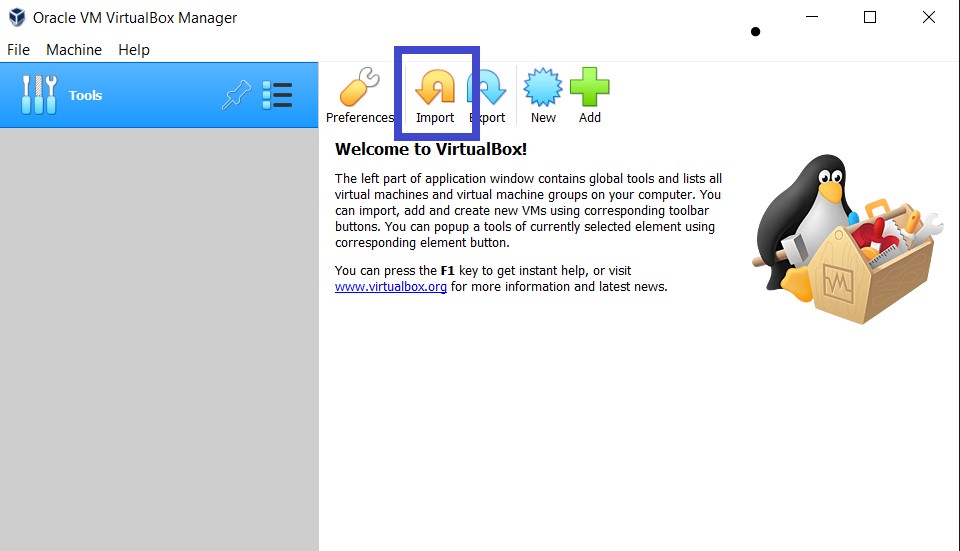 Step 2: A new window should appear, click on the file icon.

Step 3: Locate the downloaded ovf file, select the file and click on open. And click on Next.

Note: If you can't see the ovf file, extract the ova file you downloaded in Parrot OS Download Step 2 and modify the extension from .ova to .tar and extract the files. 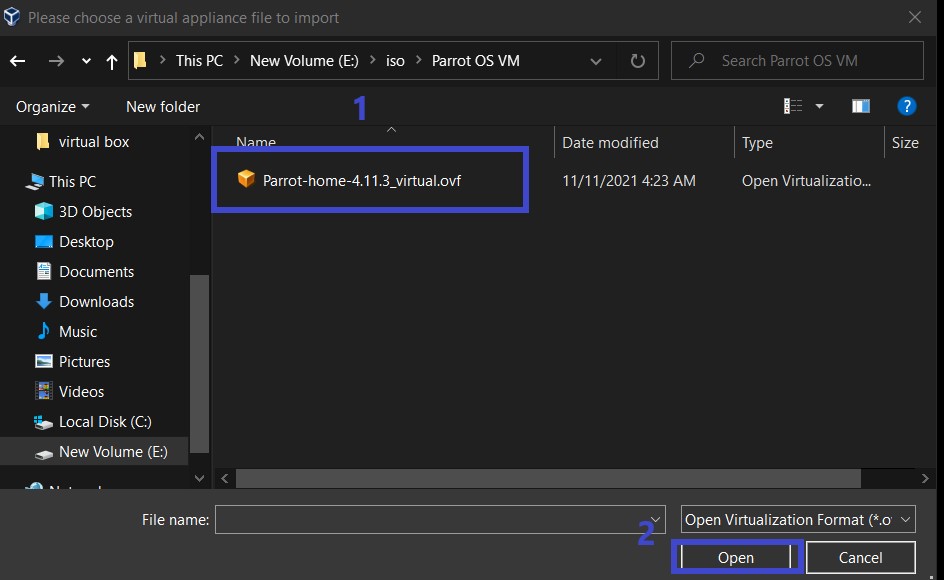 Step 4: Uncheck the Import hard drives as VDI option and click on import. 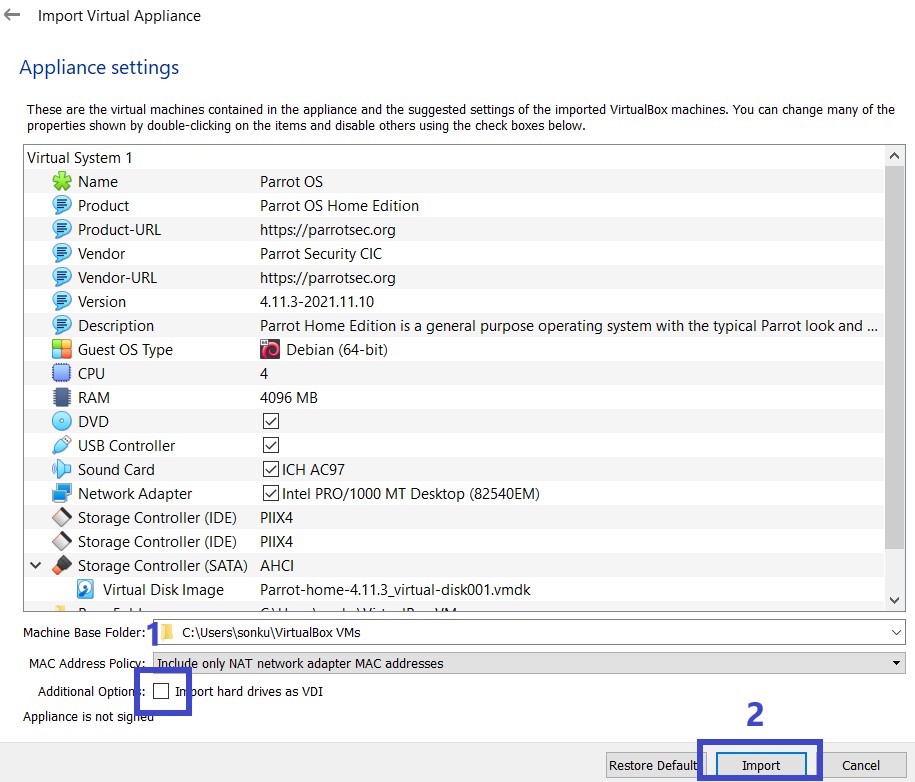 Step 5: Agree to the terms and wait for the import to finish.

Note: After the first boot-up, it will ask for a password which is "toor" (without quotes).

Step 1: Open the Terminal by clicking on the terminal icon at the top bar. If you have never used a terminal before or want to learn more about it, I highly recommend checking out the Linux Commands blog before continuing further. 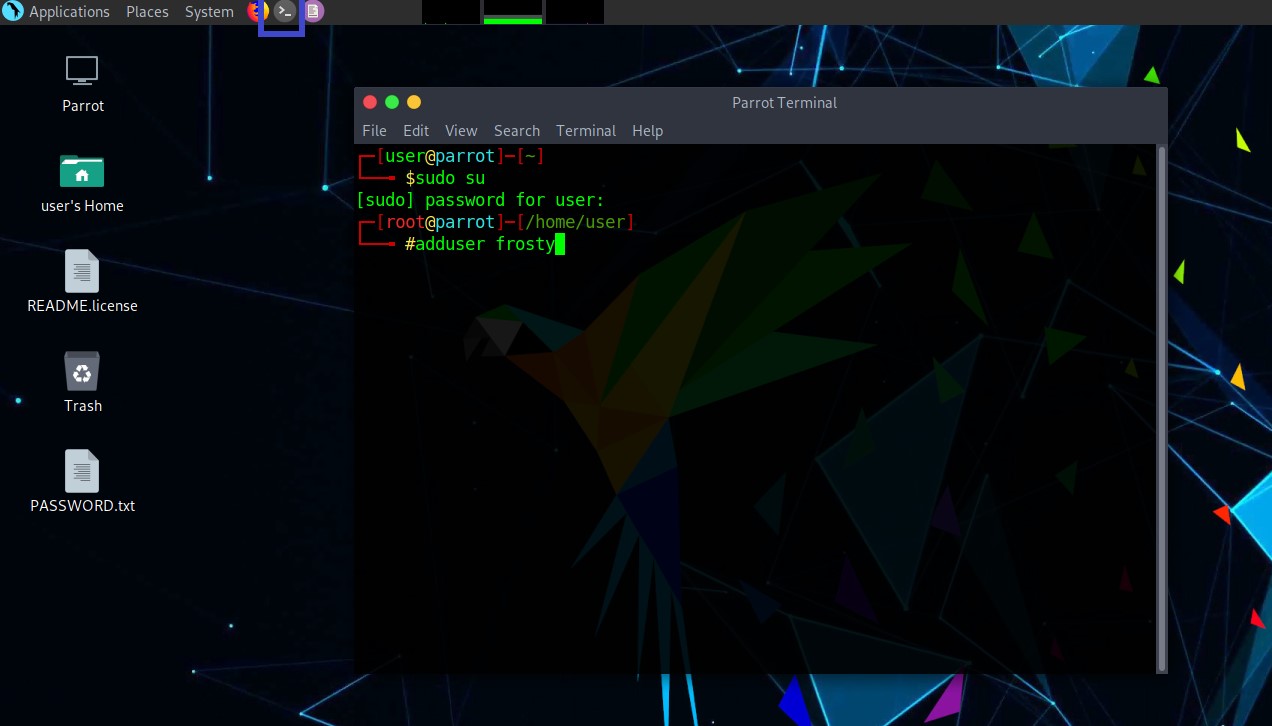 Step 2: For adding a new user you need to have root privileges. Type

As in the above picture. It will prompt you for a password which is "toor" if you did everything correctly up to this point you will be logged in as root, now type

(Replacing <username> with a choice of yours) and hit enter. It will prompt you for a password and retype the password, and a few details which can be skipped by hitting enter, continue by pressing "y" and hitting enter key on your keyboard. 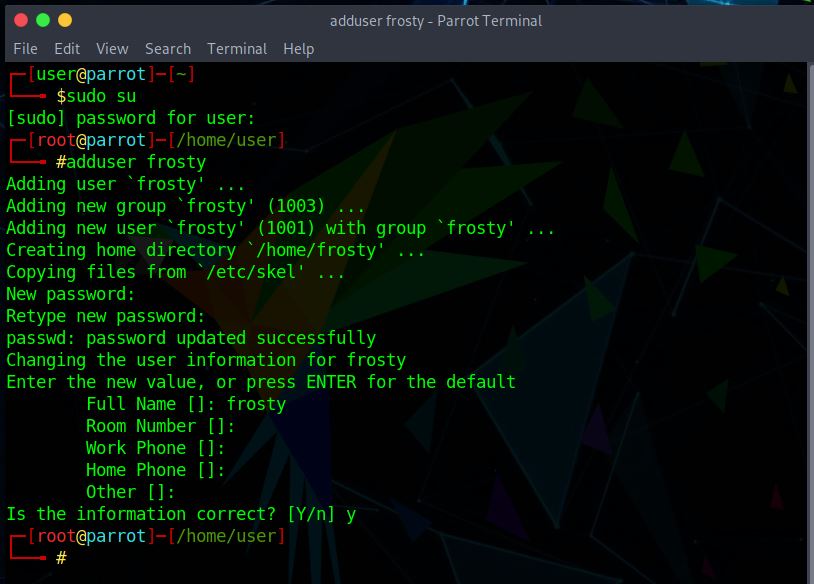 Step 3: Now let's proceed to give the new user you created some privileges. Type the following one-liner command

Be sure to change the above <username> with the one you created in the previous step.

Parrot vs Kali Vs Black Arch

Parrot OS may not be among the most popular operating systems on the market, but it has its advantages. It is also necessary for individuals who wish to start a career in Cybersecurity to be aware of various distributions. The distinctions between Parrot OS, Kali Linux, and Black Arch are shown here.

Now that we've covered What is Parrot OS? and looked at some of its distinguishing features. We've also gone through how to download Parrot OS, how to install Parrot OS using an OVA file and set it up for the first-time user. The difference between Parrot OS, Kali Linux, and Black Arch was also explored in this guide. The only way to know if Parrot OS is right for you is to give it a go. Because different individuals have different opinions on each distro, I recommend that you try as many as you desire.

Because of its lightweight nature, Parrot OS clearly outperforms Kali Linux in terms of hardware needs. Because the creators used the Matte-Desktop-Environment, not only does it take less RAM to work properly, but the entire installation is also rather light.

Is Parrot OS good for daily use?

Regular users who want a fully functional, lightweight desktop that is always up to date will find Parrot Home to be ideal. It has the same appearance and feel as a standard Parrot environment, and it includes all of the essential daily routines. To put it another way, Yes, Parrot OS can certainly be utilised on a daily basis.

Can parrot OS be used for gaming?

It is reliable enough for gaming and regular use on my machine. Because of their hardware, some users may receive unexpected results.

Can parrot OS be installed on Windows?

Thanks to GRUB and proper partitioning, Parrot OS may be installed alongside Windows. NOTE: In your machine's UEFI settings, enable Legacy mode from BIOS.

What are KDE and Mate?

It's designed to make the Linux operating system accessible to those who aren't programmers, and it's based on the Windows desktop experience and the most used set of apps. GNOME, in reality, allows the user to choose from a variety of desktop appearances.

Technical Associate at techofide, currently a student at Government College of Engineering Nagpur, pursuing B. … readmore

@Rudra_Sonkusare How to Install Parrot OS [Step by Step Guide]